Have you dated a frustrating guy?

Are you surprised that you still have hair on your head from all the pulling out this person made you do?

There are a hundred million ways someone can frustrate you (on days that end in Y, anyway, LOL) but the worst of the worst—the one everyone can agree upon is when someone F*CKS up and can’t admit to it.

When someone perceives things so incorrectly about something they did—even though that thing is universally agreed upon as being wrong—and can’t admit to it.

Barry is this guy my friend Betty went out with, and yes, we are surprised Betty still has her hair.

Barry and Betty met at a bar near her house in early November and he was immediately interested in her.

…and then he ghosted her for three weeks.

The last thing he told her is that he’d see her in a couple of hours at her apartment after taking a nap.

Then NOTHING for three weeks.

It wasn’t some “maybe I’ll see you this weekend” or anything. It was a specific time in the near future that she was to expect him.

After it wasn’t reported that he died in a fiery crash, AND HIS SNAPCHAT ACCOUNT WAS BEING USED, EVEN THOUGH HE HADN’T RETURNED HER MANY PHONE CALLS, Betty accepted that she got dumped.

His claim? He “lost” his phone, Snapchat and all.

And didn’t have her number or any way to get in touch with her on any of her many social media accounts.

And…well…the frustrating part was that he was sort of expecting HER to come find HIM and he’s disappointed about it.

This guy is serious.

He disappears for 3 weeks and then tells her that she didn’t make an effort to scour the Earth to find him!

This goes on and on, with him pretending like he did nothing wrong, like he’s a victim of having no phone.

And then he really goes overboard: 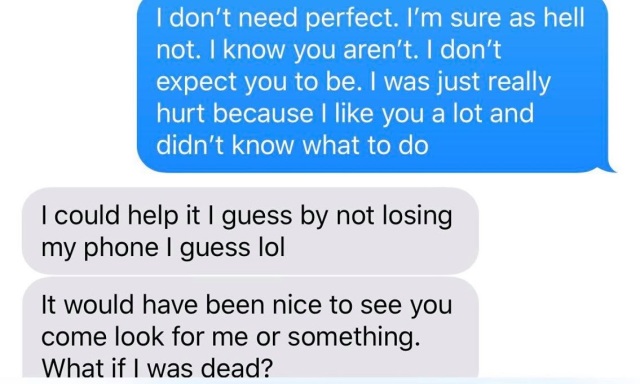 In addition to suggesting that his “ghosting” should have prompted a missing person’s report, the most obvious frustrating point was…shouldn’t he be apologizing???

What was his excuse for not facebooking her, snapchating her, Instagraming her…googling her?

And who “loses” a phone for three weeks? Was it under the bed?

Betty was the forgiving type and after about ten messages back and forth with exact directions to her house, her email address (LOL no seriously) and more, Barry said he’d DEFINITELY be over that night.

Betty didn’t even bother to text, asking what was going on.

And again, it was her problem. (With a grammar check ED note)

“I am not kissing your ass!”

I want to pull my own hair out.