There are times when it’s really not cool, man, to date someone if you have a shit ton of baggage.
Baggage: If you’re living with someone, if you’re engaged, if THERE IS SOMEONE IN YOUR BED RIGHT NOW.
Seriously, in South Carolina, you have to be divorced for an entire year WITH NO NEW “KNOWN” RELATIONSHIPS in order to be properly divorced and not annulled for fraud or something.
But that wasn’t the case with this guy David, who my friend Stephanie went on exactly one date with.
He didn’t have baggage like beating a dead horse and then waiting a year for it to die because the law says so.
He just had baggage.
No, like literally, baggage….in that he was leaving the next day for Cabo, Mexico with his “ex” girlfriend to go to a wedding that they both still had to attend together for some reason.
And the “ex” girlfriend was at his house that very moment (?) because she had a key to his place because they weren’t really broken up.
And during David and Stephanie’s date, this girl blew up his phone texting him all night about how she’s in love with him and why can’t they work it out and where the F was he??
Answer: he was on a Tinder date.
UHHH
PACK YOUR BAGS, DAVID, and please don’t come back to this country.
How did Stephanie know about all of his baggage?
Because when she saw his phone blow up, in the way you can tell when someone is texting someone over and over and you see a LIST of messages on their display, she asked him about it.
And he told her the whole story, like it WASN’T a hot mess!
He actually showed her the text messages! From his very sad “ex”-girlfriend who was IN HIS BED AT THAT MOMENT.
David must have been very drunk, because he told Stephanie that he and that girl had broken up a “few days before” without thinking that Stephanie could do math.
Because they had “matched up” and chatted online well before a “few days ago.”
Ugh.
WHAT WAS HE DOING ONLINE DATING???
…Other than I guess hoping Stephanie would invite him home????
But Stephanie did NOT invite him home. Quite the opposite: She left him at the bar, telling him to go home to his girlfriend and to never talk to her again.
And then she drove home pissed. What a waste of time.
But what did David do then??? He texted her the next day!!!
“I had to walk home from River Street ,” he wrote.
Bahahaha boo hoo.
“I must have been bad,” he wrote.
Hahahaha bad.
Did he even remember? Remember that he was a hot mess?
“Try you have a girlfriend and you were out with another girl. I would say that was bad,” Stephanie wrote back.
Ha
Then David got mysterious: “You don’t know my situation…”
Wrong. She did know his situation. He had showed her all the text messages from this poor, sad girl.
…WHO WAS IN HIS BED. 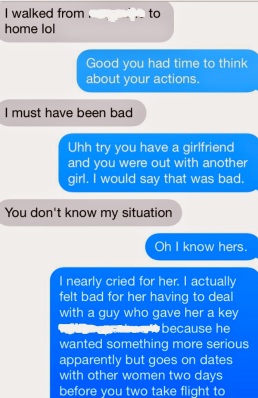 Translation: Adios.
AND DON’T COME BACK TO THIS COUNTRY.
I hope he got lost.
Along with his baggage.
-Jenny