Sometimes these posts write themselves. (Or in the case of the most hilarious voicemail in the world, uh, speak themselves.)
But, I do like to entitle these wonderful snippets of domestic upset.

In the case of the voicemail, I entitled it, “Hey kettle, you’re black.”
(Recap: You’re 30 years old! Grow the F up!”  said a recorded voice screaming, immediately followed by, “OH AND YOUR YOUR KEYS ARE IN THE GARBAGE!”)
Ha.
Grow up.
But today I’m having trouble giving a name to this glorious text message exchange between my friend Terri and her ex-boyfriend Pauly.
Pauly and Terri dated long-distance (shudder) for three years (him Chicago, her New Orleans) and it soon became clear that neither one was going to move to the other’s location.
FYI, HE could have more easily moved to where SHE was, but he didn’t want to.
When it became clear Pauly wasn’t going to relocate to be with her, and even though it broke her heart, Terri ended things.
Then of course, Pauly became furious when she moved on and found happiness with a local guy.
Of course.
Terri said she and Pauly got into arguments over her new relationship, most notably that she didn’t tell him the name of her new boyfriend, because THAT shit is irrelevant.
Terri must have accused him of being a as*hole, maybe you should have MOVED here if you’re so mad! Because a few days later, Pauly decided he needed a little boost to his self-confidence.

(let’s ignore the horrible punctuation.)
Confirm??
Confirm that I’m a good guy???
Hahahahahahaha
Good guy except for that pesky commitment problem!!!
It was an insulting text message to someone who, uh, committed three years long-distance.

Confirm. Like, he knows he’s a good guy and just wants her to back him up.
Vom.
It was especially annoying that he was now requesting that she remember him fondly after she had already moved on and was trying to forget him.
Yes, let’s all take time out of our day to remember what a good guy Pauly is!!!
But Terri responded in a very polite way to make him feel better.

(She’s a waaaaay bigger person than I am.)
But then Terri thought for a second: WAS he a good guy?? Was breaking up with him a HUGE mistake? He’s jealous; does that mean he wants to be with me again? Maybe we should try again!
Her thoughts were then confirmed. 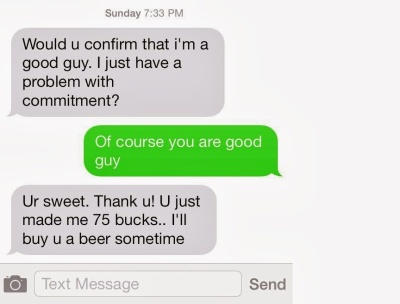 The entire conversation was outrageous.
Who exactly was he making a bet with over this??
And why was their private conversation suddenly in the middle of a POKER TABLE???
What “good guy” profits off the politeness of his ex-girlfriend???
Ugh.
Terri made the best decision of her life getting rid of this guy.
Got $75 on it.
-Jenny