One of the most luxurious things about living in a beach town is getting to go out on a boat.
Wakeboarding! An even tan! No sand in your crack!

And you get to wear your flippity floppities!!!!!!

Unfortunately, sometimes boat rides can be a complete disaster.
For example, a captain can misread the tide charts and get stuck in stinky mud for hours. They can accidentally sink their boat when too many people are sitting in the front.

Or, THEY CAN LEAVE YOU on a FREAKING ISLAND like GILLIGAN because they’re jealous that you’re hanging out with another guy.

This is what happened to me on Fourth of July three years ago.
I got left.
On an island.
By a guy I wasn’t even dating.

Taylor had just moved to the South Carolina town where I lived, and he worked with my boyfriend at the time. (Also a toolbag)

When my boyfriend and I broke up eight months later, Taylor decided that there was some sort of chance we’d start dating, contrary to the fact that I had given him ZERO signals.

Taylor had a boat, and he asked my twin sister, Joy, and I if we wanted to go out on July 4 to the island that all the cool people with boats go to drink beer.

He said we could even bring two of our friends.

“We’re gonna be out there all day,” Taylor said. “Let’s stay out on the boat until dark and watch fireworks.”

He instructed us to bring enough beer and food for 8 hours of boating. (To be clear: THIS MEANS THAT HE PLANNED TO STAY OUT ALL DAY. AM I RIGHT??)

Ok, then.
We arrived at the island and all of us set up our towels and coolers and beach games, and I ran into a guy I knew from college.

“BIOLOGY CLASS!!” we high-fived and caught up for a bit. The trouble (for Taylor) came when my college friend introduced all of us to his friends.
See, one of them had ridiculous six-pack abs.

(Like, The Situation from Jersey Shore, only he didn’t have an ugly butt-face attached to it.)

Six-pack asked me and my college friend if we wanted to go wakeboarding in the nearby marsh.

I asked EVERYONE in the group, including Taylor, if it was OK that I went wakeboarding.

The wakeboarding lasted longer than a half hour, more like an hour (hour-and-a-half MAX) and it was fun, even though I always feel like a moose being lifted out of the water.
And my bottoms almost fell off.

On the way back to the island, the guys decided they wanted to cruise around more marshes instead of anchoring the boat on the beach.

“Here, we’ll pull up close and you can jump off the back of the boat and swim to your friends,” they said.

So, I swam back to the island and looked at the spot where we had set up our towels and coolers.
Nothing.

“Wha–?” I looked at the spot where Taylor’s boat had been anchored.
Nothing.
And my college friend had long sped off. I was stranded.

I stood there, soaking wet with no towel, bewildered and confused, when suddenly I heard my two friends yelling my name.

“Taylor left 20 minutes ago to go to the boat launch,” they said. “We told him not to, but he got mad when you didn’t come back after a half hour.”

WHAT?? I screamed. HE SAID HE WANTED TO STAY OUT HERE ALL DAY AND SEE FIREWORKS!

“Joy went with him,” they said. “But we stayed because we didn’t want you to come back and be alone.”

“We even wrote your name in the sand so you’d find us,” they said. 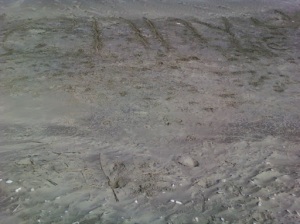 My buzz was quickly fading.

I thanked my friends for staying, and used the word BULLSHIT a lot.

I called Joy, who was furious with me because “Well, you did take longer than a half hour.”
(Taylor brainwashed her.)

“I DIDN’T THINK HE HAD ANYWHERE TO BE!! WHERE ARE Y’ALL EVEN GOING?” I demanded. “WHY DID YOU HAVE TO LEAVE?”

I told Taylor that I was, uh, back on the island now, and could he PLEASE come back and get us and I rolled my eyes as I told him I was sorry about saying I’d be a half-hour when it was really AN hour.

(The apology was at the insistence of my friends.)

ISN’T THE FIRST RULE OF BEING A BOAT CAPTAIN THAT YOU LEAVE WITH THE SAME NUMBER OF PEOPLE YOU BRING??” I fumed as we waited. It was 2 o’clock.

HE SAID HE WANTED TO STAY OUT HERE ALL DAY!!! I yelled and flailed my arms.
HE SAID IT WAS OK THAT I WENT WAKEBOARDING!!

Instead of yelling at Taylor when he pulled up, for fear he would chuck me overboard and leave me to drown, my friends had the idea to be overly sugary sweet about how nice it was that he came back for us.

“YOU’RE THE BEST!” we said to him with big, sarcastic grins when he pulled up. “THANKS SOOOOO MUCH, TAYLOR. WHAT WOULD WE DO WITHOUT YOU?”

(Joy wasn’t talking to me. She thinks I’m the toolbag in this story)

To make matters worse, instead of heading back to the boat launch, Taylor boated to a quiet area and pulled out a freaking FISHING POLE.

I opened my mouth to say something about why he IMMEDIATELY needed to leave 45 minutes ago — boating etiquette be dammed — and now he wants to go FISHING??

What was the matter with this guy??

I was completely confused.

“HOW WAS I SUPPOSED TO GET HOME TAYLOR??” I started to ask him, but my friends shushed me and we all went swimming instead.

(They told me to hold my tongue until we were on dry land. My question to Taylor went unanswered.)

He brought us back to the boat launch well before fireworks, since it was super awkward because I wasn’t talking to him AT ALL.
And I haven’t talked to him since.

“Are you mad at me?” he sent me a Facebook message later.
Delete.

Joy got the real scoop from Taylor, in her own Facebook message. It was sad and infuriating:

“…and then Jenny sees the skinny guy with the abs and is instantly off with him and then out on their boat. That was part of the reason I wanted to leave that island so bad although my stomach was really bothering me.”

Well! I’m so glad that Taylor made his abs complex my problem! (And that I’m not allowed to go wakeboarding with anyone better looking than him.)

Joy didn’t write this back, but she should have told him that acting like a complete baby and leaving a girl WHO YOU’RE NOT EVEN DATING on an island by herself isn’t the best way to win her over.

He should apologize to boat captains everywhere.

AND he should apologize to America for ruining her birthday.